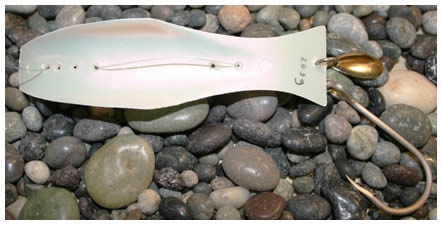 Here’s a picture of the standard way of rigging the TNT which produces a great side to side action similar to a plug. The TNT really lends itself to modification as well.

TNT’s may be rigged to carry other lures on their backs. There are many types and colors of rubber baits, such as hoochies, squirts and various curly tails, that can be incorporated to enhance the action and look of the Tomic TNT. Simply thread the line (which runs across the back of the TNT) through your choice of soft bait. 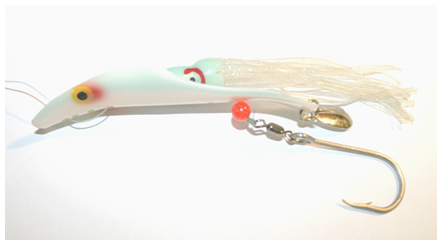 The TNT can be rigged to tow other lures behind it. In this way it can be used in place of a flasher to enhance the action of other lures or bait. Lures that would otherwise have no action on their own can be used such as flies and hoochies. Lures that do have action can also be used and it just gives them more eratic action, such as spoons or plugs, or even bait. For this method the TNT is best towed from the front hole. A bead chain tied to the leader will eliminate any line twist.

And finally, there’s what we call the T&A, the Tomic and Anchovy (pictures below). We teamed the 4.5″ TNT with a Krippled Anchovy head, and the result is an erratic roll. The action is a cross between 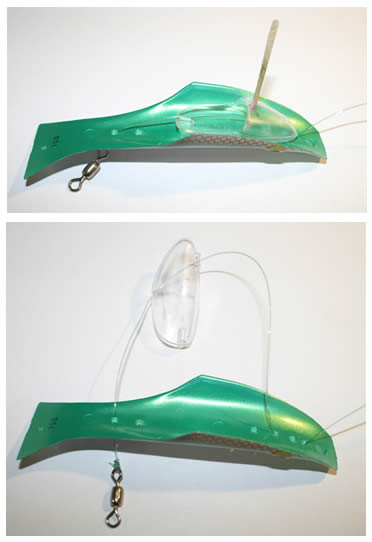 and anchovy steady roll and a plugs erratic side to side motion. The way the holes lined up, the Krippled brand worked best for us. The photo explains the rigging the best. The line is thread through the anchovy head (through the hole towards the front of the head, not the hole that is usually used for the pin or toothpick). You slide your anchovy or strip in, then put the toothpick through the anchovy head, then also through the 4th hole from the front in the TNT. The head and bait need to be securely anchored to the TNT with the toothpick. The toothpick is trimmed off once the bait is set, but we left the toothpick in the picture just to make it easier to see. There’s just a swivel in the photo, but that’s where you’d have a hook or two attached.

If it’s not looking wild in the water, check to be sure the Krippled head is securely fastened with the toothpick to the TNT. 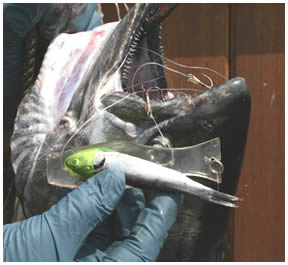