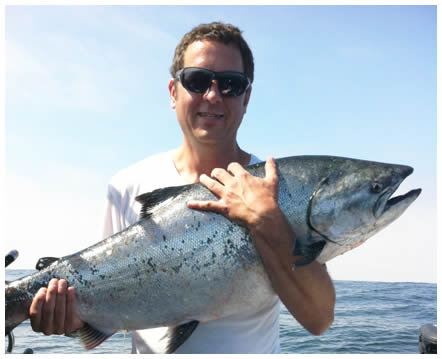 One of our favorite fishermen, Mike Parr gave some plugs to his friends. This is the note that his friend Brian sent to him: 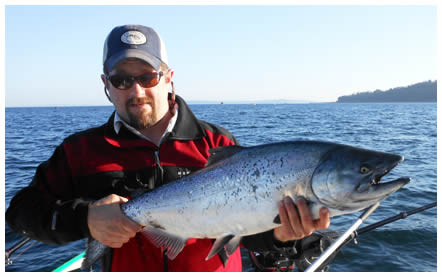 Hello everyone…I received my four 603 tubbies took my neighbor fishing the next day out of Edmonds Wa.

He hooked into this 18# King in 225 feet of water 95 feet down using the tubby…had to let it go since it was a wild fish and not a hatchery.
Thanks for a great product and fast service.
Henry Stowell 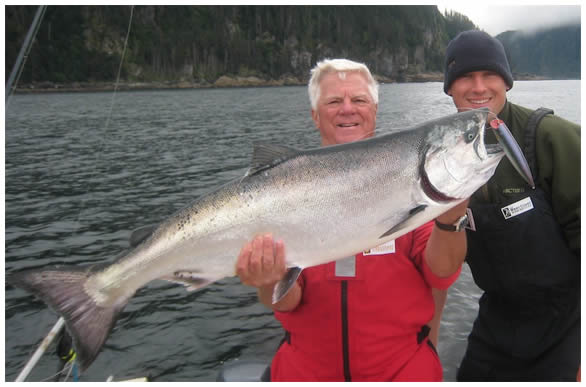 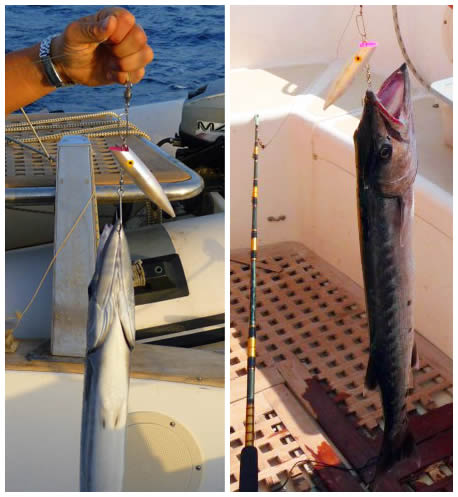 “I have found the best trolling lure ever: the Tomic classic.

I live on our sailing yacht with my wife all year round, and we usually spend 6 months of the year in the Red Sea. Although fish is plentiful in the Red Sea you need the right gear to catch the best ones. Last winter I came across a new shop in Hurghada selling a lure I had never seen before – the Tomic classic. It looked good to me so I bought two to give them a try. A few days later I had caught a nice barracuda.

After the first barracuda I had several near catches (the ones that got away) and soon the lure was full of deep teeth marks. I figured that the standard single hook setup was not sufficient for big tuna etc. so I replaced it with a double hook and that did the trick.

I bought a few more lures but am now down to just one. I lost two to big fish – one because a link was not strong enough, and another just a few days ago where the fish pulled off the teaser crimps. One more was lost while trolling over a coral reef with the dinghy. Being generous I have also given some away to jealous friends.

The Tomic is not easy to find in Greece and Turkey where we spend the summer so I am going to order a new stock on line. Thanks for a great lure and enjoy my photos.

Tony & trout down Under: 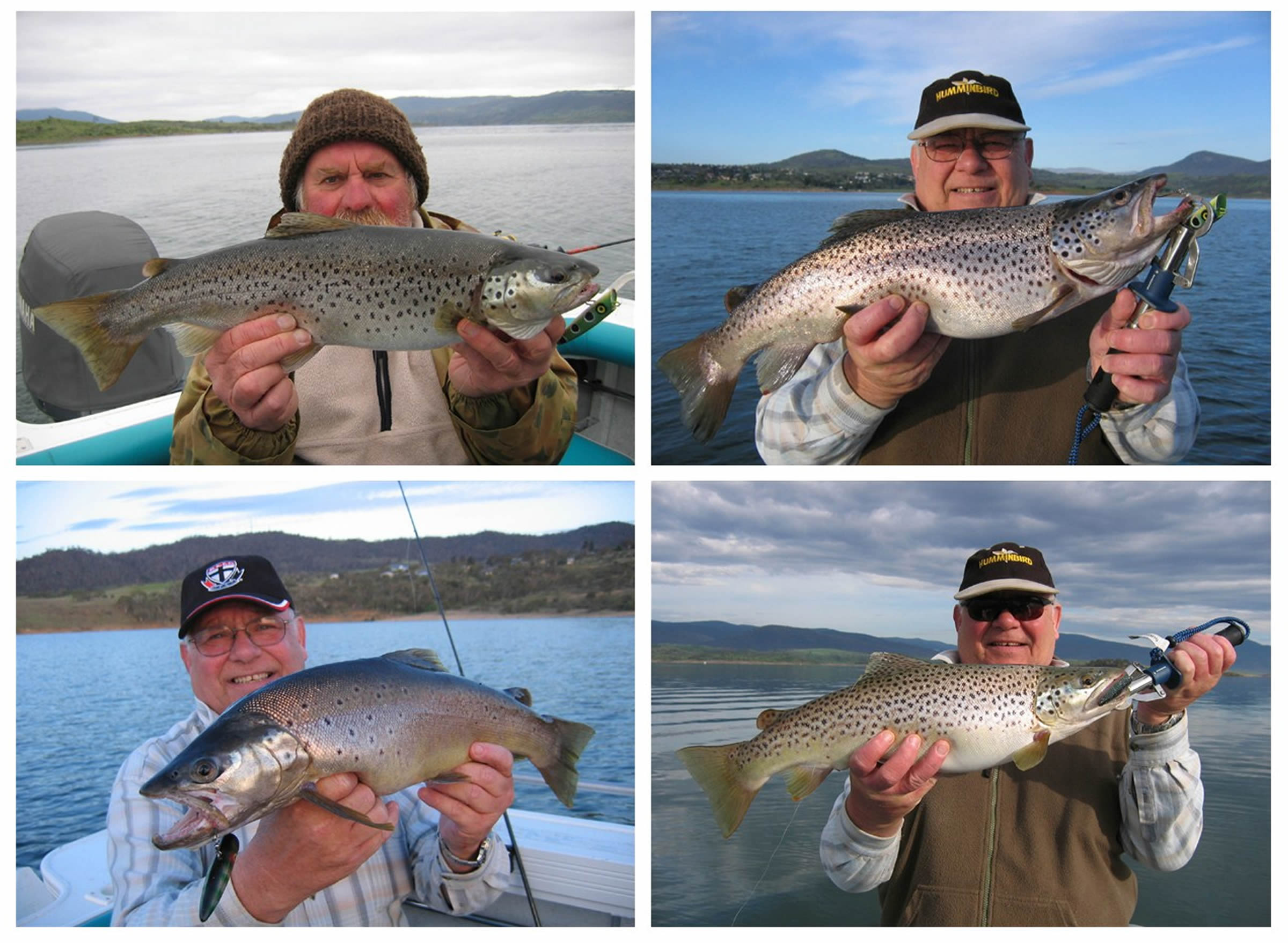 The trout just can’t get enough of your lures they just work so well. We were fishing at Lake Jindabyen for a week with my dad Jim. We were told the fishing was very hit and miss yet every day the Tomic Lures just keep catching fish of the down riggers (see attach photos). A fellow angler in the cabin beside us was doing it hard. It got the better of him so he came over one night to see how we were catching all these fish. Within a minute he had this lap top out ordering your lures on line. I also gave him three lures and he rang me about a mouth ago – he now also now is a big fan.

I’m still dreaming one day to come over there to go salmon fishing I will get here one day.  Regards, Tony Hynds

Kevin on Stripers off the coast of Virginia and North Carolina:

Can’t tell you enough how much success we had this winter with your Tomic lures off the coast of VA and NC for stripers. Best this winter was a 49 inchers on a Tomic rigged with a mojo in tandem, see beginning of this video:

http://www.youtube.com/watch?v=FxFKbhfugRE
dozens of other fish on Tomics as well, rockfish were hitting the lures on the surface as we dropped them back, Before the even had a chance to be pulled down by the weight of the Mojo’s.  Keep up the great work…. I’ll be buying more for spring.”

Then a follow up note from Kevin:  “Back in Maryland, and the Tomics are producing again, this is a 38 incher. I wanted to let you know about my experimenting with the Tomics. We have been rigging them in tandem rigs with a weighted head holding them down. I thought I would try some smaller TUBBY sizes. Just to let you know, they DO NOT work in tandem in these smaller sizes, I don’t think they have enough flotation to rise above the weighted trolling jig, so they tend to just wrap and spin around the weighted jig part of the rig. The 6 and 7 inch work great, and do not usually have any wrapping up issues like the small tubby’s did. Just an FYI in case any east coasters try ordering the small size, tell them to stick with the larger 6 and 7 inch versions for tandem rigs. We also have had success rigging the Tomics behind trolled umbrella rigs.

From New Zealand:
“….the Tomic lure we have been using on Yellowtail kingfish until recently when a we lost it to a nice ‘kingi’. Of interest is that the above mentioned lure had been bought from a shop in Campbell River in 1991 and had caught many fish including a 40lb Yellowtail Kingfish……….Thanks Again for your prompt service, Mike Gommans, Ohope Beach, New Zealand

From Alaska:
A long-time client of ours recently gave us a handful of your 5″ classic plugs and we have been crushing the Kings on them! When the bite is on and we are in the zone, I can barely get the gear in the water before we get a strike! These plugs have been outfishing Coyote spoons and herring rigs so much that the last time I fished for kings I only ran two lines with plugs in my spread.  thanks and tight lines!  capt. jeff seward, seward alaska

Your lures, especially the large plugs and spoons, were the foundation of our success during our 3-week stay in Tofino, B.C. last summer. Your 4-inch old watermelon pattern spoon helped land a 45-lbs Chinook that was the #2 fish caught at the Weigh West Resort during the entire 2009 season. Additionally, the 6 & 7 inch plugs using the pulled-pin method were devastating. Many 20 and 30-lbs class fish were taken at depth on the wire and on the surface with those lures. It didn’t seem to matter whether we worked the inside waters or on the outside off Portland Point. Many thanks and keep up the good work.  Mel Lytle 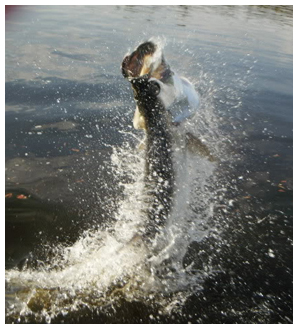 Captain Ken Roy says “I have come up with an alternative rigging for trolling the Tomic Lure for Tarpon. It is incredibly successful where I was loosing about 4 out of 5 fish before. The lure has no hooks, only a flash tail to make the total lure longer. The hooks are rigged “butterfly style” and slide up and down the leader. Rigged this way, I just about triple my catch.

About all you can see in this picture is the head of the Tomic lure. The Tarpon is foul hooked in the dorsal fin. One Tarpon took the plug, jumped and spit it and the plug foul hooked another fish instantly.”

Back to the previous feed back page