To pull or not to pull – this is the question…….

PULL AT YOUR OWN RISK!!!

Please note if you want to try this Tomic does not warranty plugs with this modification. More information on this warning at the bottom of this page.

Some fishermen modify their Tomic by removing the tow bar, then thread the leader through the resulting hole to the hook instead.

The pro side of the pulled pin debate goes like this: With a pulled pin, if a fish breaks you off the plug will float up and you can get it back. Also, when a fish is on, the plug floats up the line so the fish isn’t tossing that plug around using it for leverage to help pull out the hook. 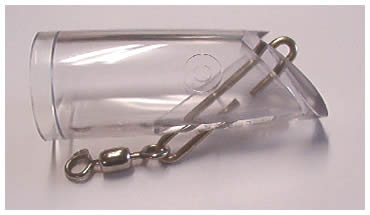 Here’s a couple of stories to consider before you take the wire cutters to your plug. The first is about pulling the pin, and is best told by Mike Mackie himself (there’s a lot of good advice in here, not just on the subject of tow bars):

“I grew up as a kid fishing plugs, mostly the old Lucky Louie’s and some commercial Tomics. About 20 years ago I bought 2 new Tomic plugs at the same time, a 6″ classic in 158 color and a 7″ 602. These were to be fished here in Campbell River in August in the Tyee pool/ Argonaught wharf area, where we were on the water almost every day. I also used them for the Gold River/Conuma fishery each year. They both turned out to be the best plugs I ever owned. I found the 6″ classic in 158 to be a killer plug when rigged with a yellow elastic band, which held the line to the top of the plug, and trolled fast. This plug caught numerous Tyee sized fish among others, and always outfished anything put out on the opposite side of the boat. The 7” 602 I found worked best when tied directly to the tow bar. This knot was held high on the tow bar by tying a second false knot just below it which stopped it from slipping down. This plug was unique in that it preferred to be fished slow. I used it to catch fish out of a row boat in the Traditional Tyee club fishery as well as out of the power boat along the Campbell river shoreline. Where this plug came into its own though was in Gold River where for 5 years it was my go-to plug. This plug would catch fish at any speed but we used to fish it slow enough that we would use cut-plug on the opposite side of the boat. Most years this plug outfished natural bait but at the least always held its own.

At this time guys were starting to cut the tow bar and feed the line through the plug to a swivel, so that if broke off, the plug would float to the surface. They were having good results with this, feeling the plugs were at times even more effective that rigging straight to the bar.This was how the old Lucky Louie’s were rigged and with the heavy fishing pressure (lots of boats close together) and big fish, breaking off a plug in the Tyee pool was not at all uncommon. Because these plugs I had were the best I had ever had my hands on I was tempted and was encouraged by others to cut the tie bars on these so I wouldn’t risk losing these prize plugs. I was worried that by doing so I would change the action and they would lose their effectiveness.

On a nice sunny morning in at the Hisnet (Gold River) in August we had boated a couple of nice fish, I had caught one on the 7″ 602. I usually made a point of re-tying my knot after each fish but the one I boated had not been particularly big nor fought too hard so I threw the plug back over and resumed fishing. The next fish hit soon after and while making a couple of good jumps broke me off. I was devastated to say the least, mad that I never retied the line and then second guessing myself for not cutting the tow bar, which would of allowed the plug to float to the surface. I was also wondering why I was using such a good Tyee row boat plug on the opposite side of the island on fish that seemed to eat almost anything you thew at them. Upon returning home I took out the side cutters and cut the tow bar on my other prized plug, the 6″ classic in 158 so this wouldn’t happen again. The result? Although I caught a couple more fish on this plug over the years it was far and away from ever being the producer it once was.

Whether it was truly from the action being changed or my lack of faith in the plug, it went from being a prized plug to one that was only average and now seldom used. I now fish my Tomics as I once did tying directly to the tie bar and taking my chances, with the exception of a couple of plugs which I cut the tie bar when it was new and unproven. Both ways work but I am still looking for a replacement for the above mentioned plugs and learned a valuable lesson: don’t mess with a proven plug by altering it in any way. I do believe that most plugs will catch fish, but that by changing the way you rig a plug, or the speed you troll it can turn a fair plug into a good or even exceptional one. Experimentation takes time but can be very rewarding.”

Mikes story ties in with a conversation we had with an Alaska commercial fisherman. He always gets plugs with the welded nose ring. When asked about his preference for nose rings, he said he actually fishes plugs all three ways. He starts off tying to the ring and after a few days he doesn’t feel like it’s that great, he ties to the tow bar, after that if he doesn’t feel like that plug is really performing, he pulls the pin and fishes that way. He says often at one stage or the other the plug will really turn on, then he leaves it that way. So, if you’re a pin puller, we encourage you to try a tide or two first with the pin in place.

Cut the tow bar at the nose of the plug. A good pair of wire cutters is important, as a smooth pin is necessary when removing. A smooth cut will ensure there are no rough spots in the hole, where the leader could become damaged and weak.

Remove the front part of pin. This part of the pin runs only part way through the plug and will come out in one short piece. Beware that on rare occasions the tow bar has been oriented the other way, so the shorter piece will be at the top. If you’re having difficulty, pull the bottom part out first then only the short piece will remain.

WARNING: On occasion the tow bar is oriented the other way, so the resulting hole that goes through the plug is the lower hole. The plug won’t work like this, so, using a drill press, carefully drill the top hole so it goes all the way through to fix it. Also, sometimes pulling the pin will cause the plug to leak and then it won’t work at all. They were designed to be fished with the pin in, so we at Tomic really encourage fishermen to try fishing with the pin in and don’t risk ruining the plug.

We accept that every fisherman has their favorite way of doing things – so good luck either with or without the pin!

Here’s a photo of Eiji’s tubing: