Tomics may be used ahead of other lures instead of a flasher.  The lures are less heavy, creating less drag, than flashers, so this method is particularly useful for fishing out of small boats such as kayaks. 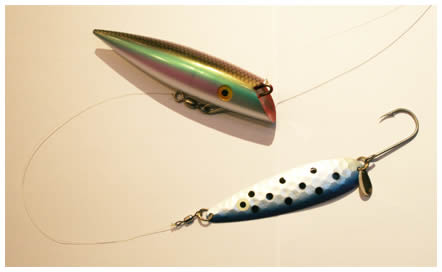 The colors in the pictures above are:

Here’s what Mike in Snowbird, Utah, says about his salmon fishing using a 6″ white Tubby: “I use them as a “dodger”. Sometimes, the flashers are a bit too violent, and the action is over the top. Here, the side-to-side motion acts like the old style dodgers, and I’ve caught LOTS of salmon this way. Another tip….send this combo down DEEEEP…release from the downrigger, and let it drift up through the fish as you troll. With a 30” leader, fish never hit the Tubby, but the spoon behind. I would suggest a leader length of 30” to 36” max. Any longer, and the action of the tubby, since it’s not as pronounced as that of a flasher, isn’t as effective.”

Both pin in style plugs and pulled pin plugs may be used. For pulled pin style plugs we suggest a swivel and bead before the plug. A quick snap may be introduced between at the bottom of the plug so the lure may be changed quickly.

Spoons may be used the same way. Here’s what John C, from Burns Oregon told us: “On my last order, you included a free gift of a large spoon in a glow finish. As a Kokanee fisherman looking for an edge, I took off the large siwash hook and trolled using the Tomic Spoon as a small dodger rigged 10 inches ahead of a kokanee bug tipped with white corn. Wow!! It out fished everything else on the reservoir. I was also very impressed with the Wee Tad in the 755 orange color. I consistently caught larger Kokanee and it held up very well.”

TNT’s may be used this way as well, ahead of other lures to give them some action behind. Pictures of TNT’s towing lures here:  TNT Tricks