Here’s a few stories and pictures that fishermen have shared with us. We’d like to hear from you too! 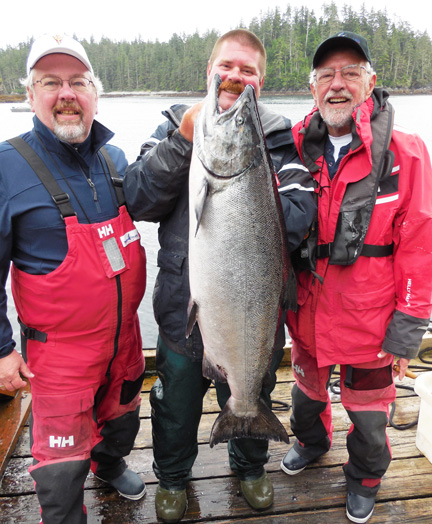 “I am making this purchase to send to my guide at The North Island Lodge on Langara Island as a gesture of appreciation.  I caught the 48 lb Chinook on the morning of 7/28/13 with my guides Tomic Classic 6″ 500.  The salmon was the derby winner for my group on this annual trip.  Unworthily a sea lion took another fish that we had on the line latter in the morning and we were not able to retrieve the plug. My guide DJ (in center of photo holding the fish) was very upset that he had lost his Tomic 500 to the sea lion so I believe that he will be very excited when he receives the replacement I am sending him.  By the way, DJ has quite a selection of your product and he swears by them for bringing in the Tyees.”  Best Regards, Glen A. Young 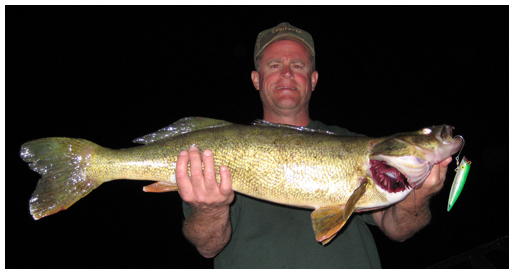 My buddy and I were trolling through the Muskegon channel when I caught this 11LB. 33in. Walleye on a classic 4 inch #115 Tomic lure. My buddy who is from Michigan, and all of his buddies could not believe this big walleye, they said it was a once in a lifetime catch and that it was also odd to have caught it on this type of lure. It just goes to show you that you just don’t know what you’re going to catch when you fish with Tomic lures! We also caught some nice salmon on the same lure. Can’t wait till next year’s trip!

“I attached a few pictures from fishing in Sweden. My wife’s family lives on a nice lake there with some pretty decent brown trout…..Take care and thanks again. Scott”

Captain Wayne D. Morgan of Frayed Knot Fishing Charters says of Striper fishing:
I learned about your 7″ Classics about 5 years ago while fishing out of Virginia Beach, VA. The Captain swore me to secrecy, but if something catches fish that good in Virginia, I am going to try it in Maryland. The success was unbelievable during our Striper spawning run which runs from the 3rd Sat. in April till about May 15th.

I usually run at least 2 Tomics in my lure spread everyday. In this area I usually run the Tomic in a tandem setup, the Tomic goes on a 20′ leader and a weighted parachute lure goes on a 10′ leader. This combination is a killer during the spawning run. Down in Virginia they run the same rig except the weighted parachute usually weigh at least 24 oz and up to 40 oz of lead. My favorite colors are the all chartreuse, all white, white with red head and gray belly with dark gray back. I have not had much luck with the glitter/sparkle patterns that I have tried.

Mike the Codfather on May fishing: “So we have spent the last few days out on the water in Nanaimo. Fishing has been very good with lots of springs up to 26 pounds. I’m fishing with a 4 inch classic 639 on the bottom rod and one of the new double sided Irish Cream spoons you painted on the top rod. On the other side of the boat is an assortment of hootchies, spoons and other lures that I’ve never seen before. This is from guys who say you HAVE to use this gear on this side around Nanaimo, because that’s all they ever used here. My side has caught 60% of all the fish and the biggest ones are always from my side. It’s funny to see them head to Harbour Chandler after a trip to buy the same stuff that I’m using that was not supposed to work on this side.”  By this side, Mike means the east Coast of Vancouver Island, Nanaimo, compared to the West Coast, Nootka. 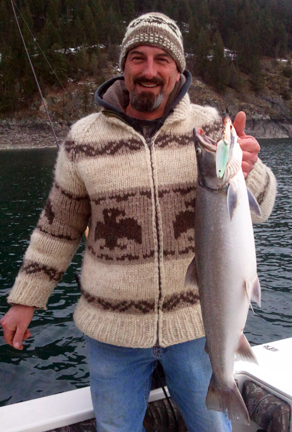 In an earlier note, bob told us this story:  “On our first trip out (Feb. 26) my girlfriend caught a seven pound bull trout that took third place in the Scotties Marina derby on Lower Arrow Lake. We were very happy to win a rod/reel combo worth five hundred bucks. The weather was nasty, fishing was very slow, one hundred competitors weighed in only seven fish total but our boat weighed in two of them thanks to your multi plugs. So far this year the biggest fish weighed in at Scotties was a 28.5 pound bull trout so I’m looking forward to spending more time in our Wellcraft Coastal with Tomic plugs dancing in the wake.

James T. on Rockfish from the Eastern States:  I was given one of your #745 Tomic lures and used it on a 6 foot FC leader attached to a three way swivel in tandem with a 4 once chartreuse parachute rig trailing a matching double hook rubber shad. The results were amazing! I caught 3 rockfish in one half hour. One 38″, one 40″, and one 42″ all on the same tandem rig with the Tomic plug. We were trolling 6 rods that included a 21 Toney Acetta, a 19 Toney down deep and three other assorted colored 4 oz and 8 oz parachute rigs. They were not touched, only the tandem rig with your #745n plug caught the fish. Unfortunately the fourth fish that hit the rig broke the line and we lost the rig. After that we did not have a fish hit any of the other lures. Your lures look great and seem to drive big rock fish crazy.
Bruce C. on Wee Tads in California:  “Just wanted to let you know that I have had fantastic success with wee tads at Lake Don Pedro located in the foothills of central California. I have been testing them throughout the summer and fall against other lures and have found them to outperform consistently when trolling for kokanee and trout.”

Sequel to John M’s story from Ucluelet (original story below):

“It looks like the lesson learned in my story written several years ago for your website was truer than I thought. The picture on the front page of your website is of a 38 pound Chinook jumping in the air with a Tomic plug in its mouth. I mentioned we found it floating on the surface off Starfish Bank and when we tied on to it and threw it out, the 38 pound Chinook hit it on the surface before we even had it attached to the downrigger.  If you look at the Ucluelet Ladder Derby finals last weekend, the top three fish were over 40 pounds, two of them at the Starfish Bank and all three caught at a depth of 0.10 meters! It doesn’t say what they were using but just about everyone was using 7 inch Tomic plugs the last 3 to 4 weeks as the sardines moved in. We found the 602 and 500 plug the most consistent. I got a good look at a large school of sardines in clear water and their bellies are white like the two plugs mentioned. Likely they’re attacking mainly from below so the white belly is the key for them to target. The sardine plug with the yellow stripe on the bottom didn’t produce nearly as well. Likely it would do better with a white belly.  Best Wishes, Jonn M. 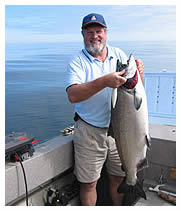 Having worked two summers on trollers while going to university in the late 1970’s I had a large collection of 6 and 7 inch Tomic plugs that I rummaged through. Trying a number of them at different depths I found that the fish preferred light colored ones but would only bite shallow as the downrigger was rising, indicating that they preferred the faster action. Yet, no fish over 30 pounds.

In mid August my brother came up from Tasmania for a fishing trip and on the way out to the banks he spotted something white drifting on the surface. On picking it up it turned out to be a 600 tubby Tomic plug. I knew that Tubbies had a greater action at slower speeds so why not give it a try. We set out flashy gear deep on the starboard and port downriggers and had just laid out the plug line 30 feet behind the boat but didn’t get a chance to rig it to the center transom downrigger as fish began to hit the other two lines.

After slowing the boat down to minimal speed and reeling in and releasing the two small Chinook, the middle rod and reel suddenly exploded as something hit the plug idling on the surface. Steve grabbed the rod as it was about to fly overboard, the reel screaming. A very large Chinook was flying through the air like a rainbow trout and then proceeded to try more of his prodigious bag of tricks to get free. Jumps, dives, twists and turns, all to no avail as his 38 pounds eventually ended in the net.

So several things were learned about catching large Chinook on the west coast of Vancouver Island in August:

Thank you for such a great product, Jonn Matsen

Tuna off Vancouver Island, BC: 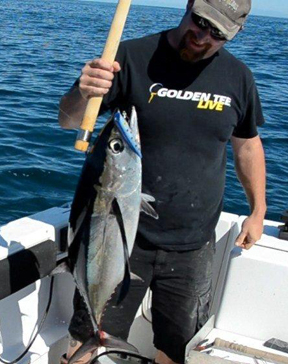 I was out looking for Albacore tuna about 50 miles off Tofino the first week of Sept 2011.