The name comes from Tom and Dick who started Tomic. Dick soon moved on to other ventures, but the name stuck. Tom continued for over half a century building and perfecting Tomics.

History of Tomic by Wayne Moss

Tom decided to retire in 2002 and taught Cameron & Catherine Forbes the Tomic secrets.

Cameron grew up fishing from Gold River in Nootka Sound on the West Coast of Vancouver Island, and knew Tomics well. He saw an opportunity in Nootka Sound, and built the fishing lodge Critter Cove, starting in 1993. Critter Cove is now the official test tank for Tomic of course.

Catherine grew up in Campbell River (East Coast Vancouver Island) also from a fishing family. Catherine’s grandparents built the original Painter’s lodge, but it was sold from the family in 1949. Catherine was particularly familiar with Tomic from fishing for the Tyee Club which requires artificial lure only and fishing from a rowboat. Catherine landed her first Tyee for the club when she was 9 years old.  Her biggest was 53 pounds in 1986. That fish was the biggest of that Tyee Club season, making Catherine Tyee Man for 1986. She worked as a salmon fishing guide in Campbell River during summers for a dozen years before moving to Nootka in 1996. Catherine was managing another lodge in Nootka when she met Cameron at Critter Cove, and decided to stay in Nootka for good.

Once Tom taught the Forbes about Tomic, they moved the workshop to Gold River where it is today. Several talented lure makers and air brush artists help us make our lures in Gold River.

In this photo below Susan and Toni are painting with airbrushes, and Sandy is painting on the pupil with a small brush. 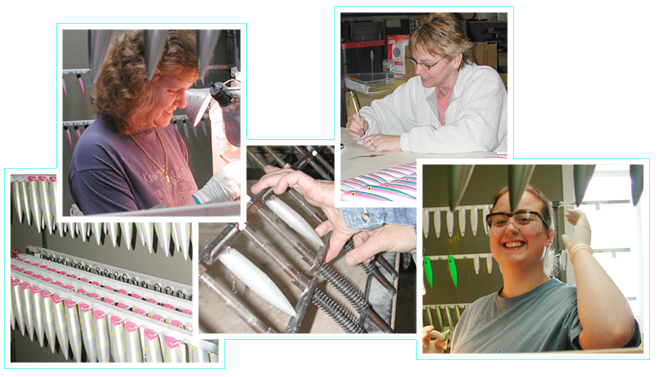