Stacking has proven highly effective in some situations. For this method, a plug is fished on the same leader as another lure, ahead of the other lure. The two lures are separated with a bead which has a toothpick jammed in it. The bead is moved to keep the lures the desired distance apart (2” to 30”). 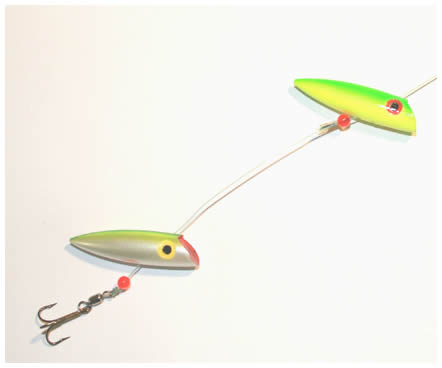 When the lead lure is smaller than the trailing lure, we figure it looks to a fish like one fish chasing another. Also, the leading lure will add some action to the bottom lure. 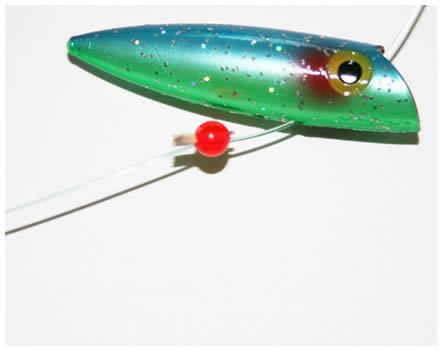 The possibilities are endless for lure combinations this way. Bigger plugs may be used for the lead lure as well, either by tying to the tow bar above and below, or by pulling the pin.

Very large plugs can be used as the lead plug to give more action to the trailing lure, in the same way a flasher in line might be used. More detail on lead plugs for action here.

Here’s what Fisherman Terry says about stacking “I pull the pins out and I tie a ten foot leader with double single hooks to the main plug. Then I put two wee tads in front of the large plug with the use of plastic beads and tooth picks. I put the tads about one foot in front of each other. This has been real good in the Lake Cowichan area, fish deep off the downrigger and tow the gear at about 2.3 up to about 2.7 miles per hour. The tads help attract fish to the main plug in use. The tads are hook free. Terry E. 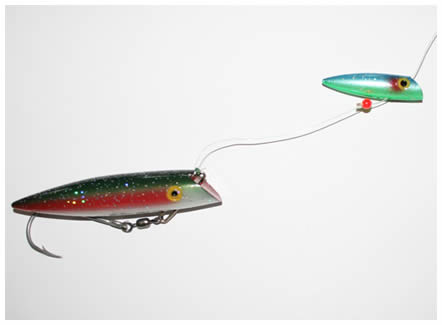